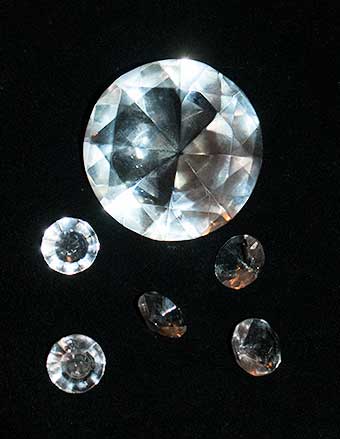 I planned to post on the Facebook Bone Reading Group, asking if anyone was planning on doing, or had already done a bone reading for the year 2015. I was hoping to get some ideas on how folks were going about doing this. For some reason it never got posted so I had to come up with something on my own. When I used to read tarot cards, I used to do this type of reading, typically drawing a card or two for each of the upcoming 12 months. I thought I could do a bone throw for each of the 12 months instead, but it seemed like a lot of work so I came up with something simpler.

I have a set of glass gems I bought at the dollar store a while back. I found them in the wedding decoration section, and I suppose they are meant to be table decorations. The set has one large gem and five smaller ones. I was already using one of the gems in my travel set to highlight something that is important and should be looked at in a throw. I washed the others, cleansed them with Florida water, and ran them through some cleansing incense to get them ready, then I added them to my travel set for this throw. My thoughts were that each gem would highlight something important that would occur or something to watch out for in the coming year. I did my regular preparatory work asking deity and my ancestors for assistance and did a throw. I won’t share it here, but I will share some of the things I learned from doing this and give some suggestions on how you can do this as well.

The first thing I discovered is that six is probably too many things to highlight. The throw showed this by putting two gems each in two of the groups. The large gem was by itself, as was the remaining gem. This could be telling me that in the future I should limit it to three or four highlights. It could also be telling me that the two groups that had two gemstones are really going to be pronounced this year, but I think it is the former rather than the latter. So a throw with three or four extra pieces that are easily distinguishable seems to be a simple way to do a reading for the year. Based on recent events I can already see the accuracy of one group. Only the future will tell how accurate the rest of the reading is.

You don’t have to have fake gemstones to do this reading – any small items that are easily distinguishable will do. You could do one large one for something especially important and a few small ones like I did. Or you can keep them all the same or of a similar size. Seashells, a personal favorite, or buttons from your sewing box, or even safety pins, or paper clips would work for this. These are not pieces that you are going to leave in your set so aesthetics can be given less consideration. You could even use something like different colored stones to represent different areas of your life – love, career, spirituality, etc.

Of course after I did the throw I had the idea to use dice. The numbers could provide additional insight into the group they fall with. I may do another throw with my main set using dice to test this out, even though it sort of feels like cheating or shopping for a better answer after having done my initial throw. Maybe someone else will try it and let me know how it went. 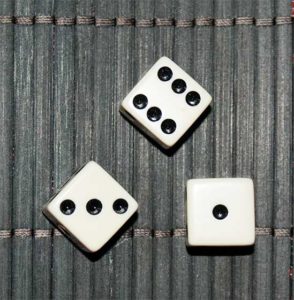 I took a photo of this throw and wrote some notes about my interpretation of it. I may refer to it during the year, but based on my experience using tarot cards it is more likely that I will remember it when something it said plays out, and look it over with a more critical eye at the end of the year when I do the reading for 2016.

Of course this type of reading can be adapted to any time period you choose. It may be a bit much for the next week at work – a regular throw would probably work just as well for the immediate future. But for longer time periods it gives you a few key areas you can focus on.