Skip to content
Home/The Spirits Had Other Plans
Previous Next

The Spirits Had Other Plans

Last weekend I was in Denver to present at the Mile High Conjure Gala. I was honored to be presenting with several great workers – Co Meadows of the Hoodoo Queen, Ambrozine LeGare, Professor Ames of the Skullbone Emporium, Professor Porterfield, and Candelo Kimbisa of Candelo’s Corner who was the master of ceremonies.

The day was set up so that everyone could attend every class with time between classes set aside for readings. The day began with a ceremony for the ancestors and spirits. The spirits were definitely in attendance and it set the tone in a perfect way for the day.

First up for classes was Co Meadow’s class on baby dolls. This was a class on old school conjure. None of those store bought doll babies – these were made of socks, sticks, Spanish moss and herbs. As Co explained people used to use what they had on hand and if you could get someone’s sock you had the additional advantage of using a personal concern in your work. We each made a doll baby and Co provided information on how to take care of and work with the doll babies we made. I really enjoyed his class!

Next up was Ambrozine LeGare who taught a class on spiritual cleansing, with an emphasis on spiritual cleansing for those who do spiritual work for themselves or others. Her class was was straight forward, no nonsense information on the hows and whys of spiritual cleansing. She also provided several great recipes for cleansing baths, which I am sure I will be adding to my arsenal. I loved that she explained why she does things the way she does, and how she chooses the herbs and ingredients she uses in her customized cleansing products. She also covered areas that are often neglected in cleansing classes such as cleansing pets. Great class! 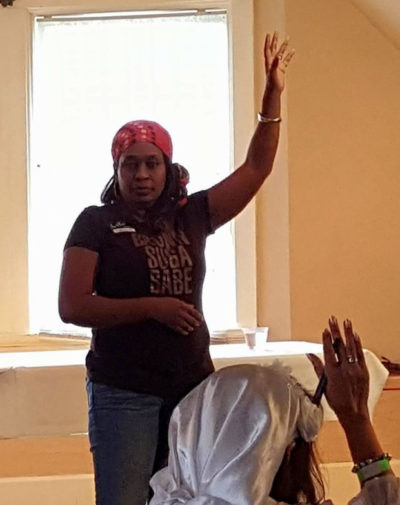 Professor Porterfield, author of several books including A Deck of Spells: Hoodoo Playing Card Magic in Rootwork and Conjure, taught a very interesting class on playing card magic. He talked about how to use regular playing cards for all types of work. He began by giving a brief history of playing cards, and explained that people have been using them for occult purposes almost from the beginning. Professor Porterfield discussed why they were such a versatile magical tool, and how they could be used for several different types of work with examples. Of course the Professor has a one of a kind presentation style so you had fun as you were learning. 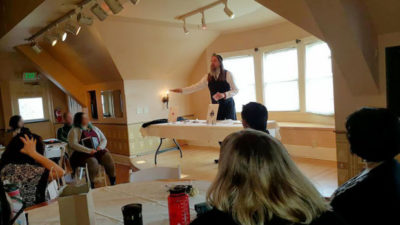 Professor Ames of The Skullbone Emporium gave a class on Mojo bags. I was otherwise occupied and unable to attend his class, but all of the feedback I heard about it indicates that it was much enjoyed by those who did attend. It was another hands on class where the participants were able to make their own mojo bag for whatever purpose they wanted to. I was able to purchase one of his oils though, and he gifted me a new piece for my bone set. I will definitely make it my business to attend next year. 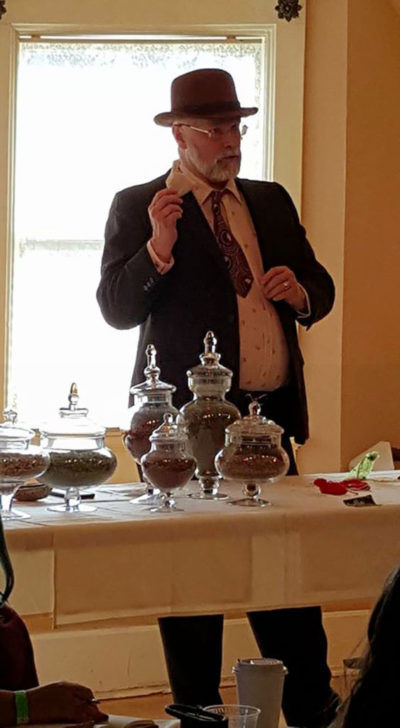 My class on bone reading was a 72 slide PowerPoint presentation where I provide some background information on bone reading, show and discuss several different bone reading sets and styles, and ultimately have the class do a brief reading together. However, the spirits had other plans. We could not get the projector to cooperate. Things would go well for a few slides and then the projector would say there was no connection. We checked all the connections, restarted the slide show only to get the same message a few slides in. I have given this presentation before with no problems, my laptop is pretty state of the art, and the fact that the presentation would start just fine only to quickly fizzle out leaves me at a loss as to what the problem was. When it was clear that we could not identify, let alone fix the problem I decided to get my bones and just talk about them instead. Thankfully this change in plans was well received by the group and I was able to do some of the things I wanted to do seated on the floor with everyone gathered around. I was so flustered I forgot to tell folks what was in the swag bags so for those who attended, those are coyote foot bones. 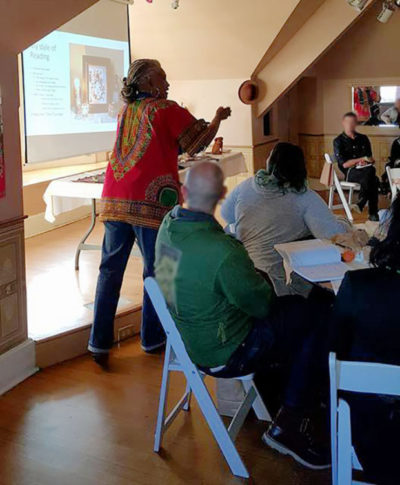 Candelo Kimbisa of Candelo’s Corner finished out the class portion of the day and we then went on to the dinner for the dead, and the Gala portion of the day. The food was good, though I really missed the salt, and the party after dinner was jumping with a bar and live DJs. What happens at the Mile High Conjure Gala, stays at the Mile High Conjure Gala, but I will say that a good time was had by all! I am so looking forward to next year’s gala! 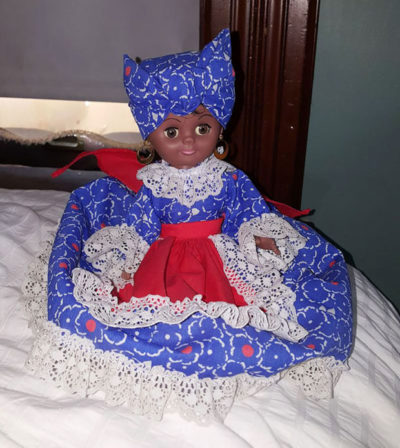 Lest I forget to mention it, the festival was held in a haunted mansion named The Lumber Baron Inn. It is now a bed and breakfast/ fine dining restaurant and bar. The classes were held in the ballroom, which was perfect for this use. There were a lot of vendors from the area and several of the presenters brought their own products to sell as well. There were also readers available between the classes including local bone reader R.J. James*. As a presenter who has done several events in the past, I have to say that this was one of the best festivals of this type that I have ever had the pleasure of teaching at. Our hosts took care of our every need and made it all look easy, even though this was the first time for this event. Loretta, a.k.a. The Death Witch whose dream was the genesis of the gala, and whose planning and coordination made it happen, can be justifiably proud of her brainchild. Thank you Loretta. And a special thank to the owner of the inn, Elaine Bryant. So many other folks helped to make this event seamless – thanks to you all! 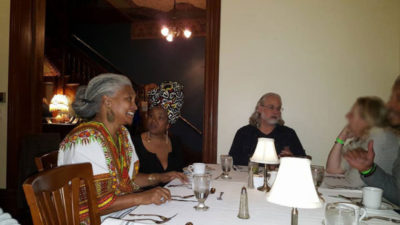 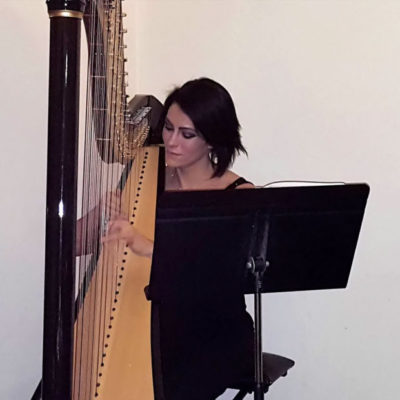 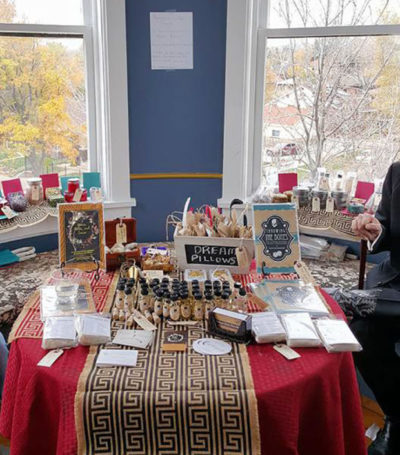 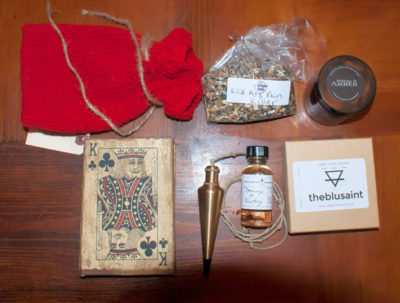 If you were interested in magic, rootwork, conjure, divination, ancestor and/or spirit work you should start planning now to attend next year. It will only be bigger and better. I know it’s early, but I am posting 2018 contact info now – mhconjuregala@gmail.com. I would be very surprised if next year doesn’t sell out quickly.

P.S. Rumor has it that Starr Casas may be a presenter at next year’s gala.

All photos except the last two were taken by Candelo Kimbesa.

If you are in the Denver area R.J. James can be reached for readings at: br.rjjames@gmail.com