I have a piece to represent listening in my main bone set. It was one of those pieces that I did not know that I needed until I saw something that spoke to me at a gem fair – a piece of polished, fossilized whale inner ear bone.  Sadly it recently broke into two and had to be replaced. I really loved my original piece.  It was only a portion of the original bone, not the whole thing, and one side was polished resulting in a beautiful stone like piece that was a a good size for my set. It could present so that the polished face was visible – which I read as a need to listen carefully, or not – which I read as the piece being silent. From the beginning small slivers around the edge of the piece would occasionally flake off. This happened for a few weeks and then stopped so I didn’t think any more about it. I assumed that the fragile parts had been shed and that it would now last forever. I was mistaken.

I thought about using one of the broken pieces, but the newly exposed side was not polished and it was no longer as visually pleasing to me. Sadly I decided that the piece has worked long enough and I plan to return it to the ocean on my next trip to the beach. I needed a replacement and looking through my overflow bin I found a deer antler tip that I thought would work. Deer often stop and listen intently when they hear a sound that doesn’t seem to belong. It was not the most aesthetically pleasing piece, but it worked. I looked for another polished inner ear piece for a replacement, but I found them too expensive for my tastes. My original cost much less than the pieces I found online. I went back to the gem fair, which happened to be in town shortly after the break, but the vendor I bought it from did not have any more. She recommended another vendor but they did not have any either. 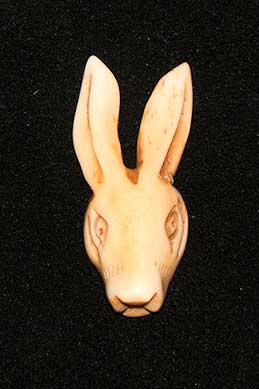 I ended up buying a rabbit head carved from bone at the gem fair, but I didn’t like it any better than the antler tip, so it ended up in the overflow box. Then I thought that a rabbit bone might work, so I started to look for one. Finding rabbit bones for sale without buying a whole skeleton was not as easy as I thought it would be! I finally found a seller on Etsy* that had a group of rabbit and deer bones for sale for a reasonable price. I asked her if she could separate them by species and she agreed so I purchased them. Now I have to decide which bones to actually use. Here are my narrowed down choices.

Most of us are constantly bombarded with information from many different sources so we learn to tune out a lot of what we hear each day. For me this piece can indicate that we will soon be hearing something that will be valuable, or helpful to us, and that if we are not listening carefully we may miss it. It may be next to a person piece, in which case it can indicate a need to listen to someone specific who is described by the pieces it is close to. Or it may be near an ancestor piece, which could indicate a message from that ancestor. It could indicate what we will be hearing about – if near a coin we may be hearing about money, near the work piece we may be hearing about a job opening, or about something related to our present job. I find this piece quite useful and now that I have several bones to choose from I will probably add this piece to my travel set as well.