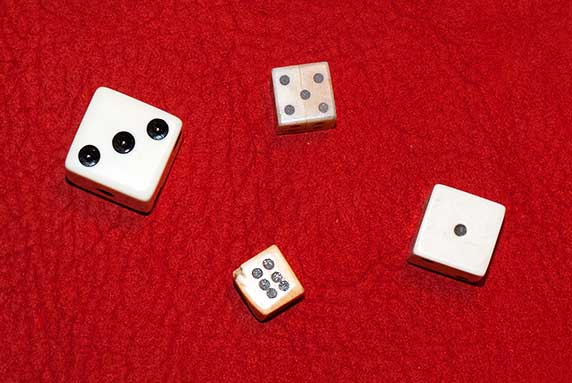 Recently I had to swap out the die in my main bone set. It was the original die that came with the first set of bones I bought. It was one of those small, antique bone dice that most of the bone sets available for sale seem to have. It has served me well, but I am having trouble seeing and identifying the number showing on it quickly. I replaced it with a bigger die which will be easier on my old eyes. I have eye glasses, but I rarely wear them and it is easier to swap out the die than to have to remember to put them on every time I want to do a reading. The swap prompted me to write this blog post.

I have one die in my bone sets. I use a regular six sided die made, most likely, from cow bone. I find it one of the most useful pieces in the set. The die tells me the overall theme of the reading. I have a simple system:

When the number one is showing the client is getting ready to begin a new chapter in their life. It is a fresh start of some sort. If the question is about their career it could mean they are ready for something new. If it is about their love life it could be a new relationship, or a new chapter in their current relationship. If the frog (Transformation in my set) is sitting upright this is magnified. They are beginning a major life change of some sort.

The number two tells me that the client is trying to make a choice of some sort, even if they don’t say they are. For example if the client says they want a general reading and I see the number two on the dice, I ask if they are facing some major choice in their life and most of the time it turns out that they are, even though that wasn’t stated up front. Once you know that you can discuss what you see around the area they are are making the choice about and possibly do some additional throws to address specifics and get more information.

Three tells me that things are flowing as they should be. Even if the client is experiencing some discomfort in their life at the time of the reading three says that they are headed in the right direction and eventually the rough patch will pass.

The number four tells me that things are stable and that they probably aren’t going to change too much in the near future. This can be good news or bad news depending on what brought the client to you. If they are trying to make a major life change, this could indicate the going will be slow or they may face resistance to their plans. Maybe the timing is not right for the change they want to make. If things are going well, they will probably continue to do so for a while., though not forever.

When I see the number five. I ask the client if they are under stress, or if it is a relationship question I ask if they are not getting along with their partner, or arguing. The answer is usually yes. Stress, strife, arguments and disagreements all come under the number five. When this number comes up I look at the reading with an eye to finding things that can help them reduce their stress or if that is not possible, I look for things that will help them cope with it. The shell I use for gifts is usually helpful here and I often find that the bracelet that I use for actions to take has something that will help them as well.

Six usually tells me that a chapter in the client’s life is coming to a close.  They have gone as far as they can under the present circumstances and it’s time to move on, or make a change. Maybe they need to let something go that they have been holding on to even though it no longer serves them. Maybe it’s time to find a new job. Usually when I ask they tell me that they have been feeling the need for a change. Sometimes it’s just a vague restlessness, or sometimes they are clear that they need to move on in some area of their life, but have been reluctant for whatever reason. The reading may help them by giving them the confirmation that it really is time for a change. They are ready to step into the number one. It can also be a peak period – they may be riding high and things are as good as they can get. However, you can’t ride that wave forever. Change is inevitable and the client should prepare for it if he or she can.

While I use a six sided die, there is no reason that you can’t use some other number die if it would work better with your personal numerology system or understanding. Dice are available with less than six sides as well as more than six sides. Or you could use two dice if you like. There are differently shaped dice, colorful dice and themed dice like the Cthulu dice. I like dice made of bone, but there is not reason to restrict yourself in your choice of materials.

Many of the starter bone sets for sale include a die. Or you can add one if you are creating your own set and think you will find it useful. I find it very useful and it is one of the first pieces I look for in a throw.