Skip to content
Home/Bone Readers, We Have Lost A Shining Light…
Previous Next

Bone Readers, We Have Lost A Shining Light… 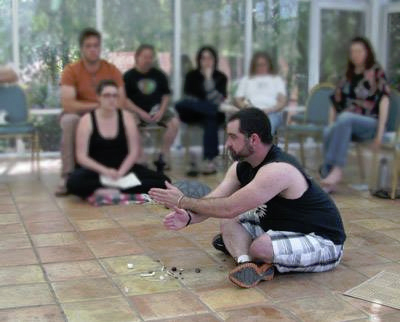 A gifted priest, rootworker, artist and bone reader has passed away. Eduardo Martinez Guitterez, better known in the Hoodoo Rootworker community as Dr. E, has passed on.

I first encountered Dr. E in 2001 via his blog The Year in White. I was starting to work with an African Traditional Religion at the time and I found his blog interesting. He seemed sincere, knowledgeable, and as the months went on completely honest about the good and the not so good he was experiencing as a result of his initiation into Ocha. I was pleased that his story had a happy ending and that he took his experiences and used them to help others by starting Santeros Against Fraud and Exploitation (S.A.F.E.).

Over the next several years we would run into each other at Pantheacon, but those encounters were little more than friendly greetings. We continued like this until this past year when I attended the Missionary Independent Spiritual Church’s Hoodoo Heritage Workshops.  Dr. E and I were both presenting and I discovered that he was a bone reader! A couple of months later I went to a Bone Reading Workshop in  Santa Monica  and he was there as well. There were some pieces of coprolite for sale at that workshop, among other things, and I had picked out the piece that I wanted to purchase when they were shown.  However, when it came time to buy them at the end of the workshop he bought the one that I wanted before I could get across the room to it!

In the fall of 2013 I joined the Association of Independent Readers and Rootworkers and I volunteered to assist on the tech team. Dr. E was a key player on the team and I got to spend several hours a week in phone conferences with him. He was funny, wicked smart, and most importantly generous with both his time and knowledge. He was never too busy to answer a question or give advice when asked. As someone who had just hung my shingle I really looked forward to those hours spent talking with him and listening to his always cheerful and lighthearted conversation while we did  maintenance work on the A.I.R.R. website.

Recently I started working with an ATR again and I was starting to think of  some things that I wanted to talk to him about. I didn’t want to do it during the tech team meetings because I hadn’t really gotten my thoughts in order yet and they weren’t really on topic for the meetings. I knew I would be seeing him in a few weeks at Pantheacon and I was hoping to catch him in the lobby one evening,  have a drink and chat. On Tuesday we had a productive meeting that ran for over two hours. As usual he kept us in stitches and made the time seem to fly by. When I looked on Facebook later that day and saw that he had passed away I could barely wrap my mind around it. What a loss to his family. He was in a relationship with the love of his life. I got to meet his mother at the workshops and you could see that they were incredibly close and supportive of each other. What a loss to the spiritual community. He was an active member of the Ocha, Hoodoo and Pagan communities and he made an indelible mark in each. His classes, gatherings, workshops, and writings were always well put together, highly informative and extremely interesting. That is no small feat considering that these are topics that can easily be dry and dull in the wrong hands. His presentations were always interesting because he was so interested in the topics himself and his enthusiasm and love of knowledge was infectious. That he was charming and funny was just icing on a delicious and expertly baked cake.

He leaves a lasting legacy of shared knowledge and wisdom and people whose lives were made better for having known him. He  lived his life in such a way that he left everything he touched better than it was when he found it.  His family and loved ones are in my thoughts and prayers.

I have heard that Dr. E’s family will be keeping his website Conjure Doctor.com and his online business running.  I am very happy to hear this. There is a lot of great information on his site and the business has an outstanding reputation. They have helped many, many people over the years. I hope that everyone reading this will continue to support them. I know that I will. They sell Lucky Mojo Brand bone reading sets so if you are looking for a set, please consider purchasing it from them.

There is also a GoFundMe memorial drive for his family here. Please check it out and donate if you can.

Dr. E has joined the ancestors. His presence will always be welcome in my home and at my altar. We have lost a shining light, but the heavens have gained a new star.

*I do not know who should be credited for this image, but I will be happy to attribute it to the photographer immediately if contacted.